We are proud to announce we have been shortlisted in the top 3 for the final of Best Newcomer Award @FishnChipAwards congratulations to everyone. 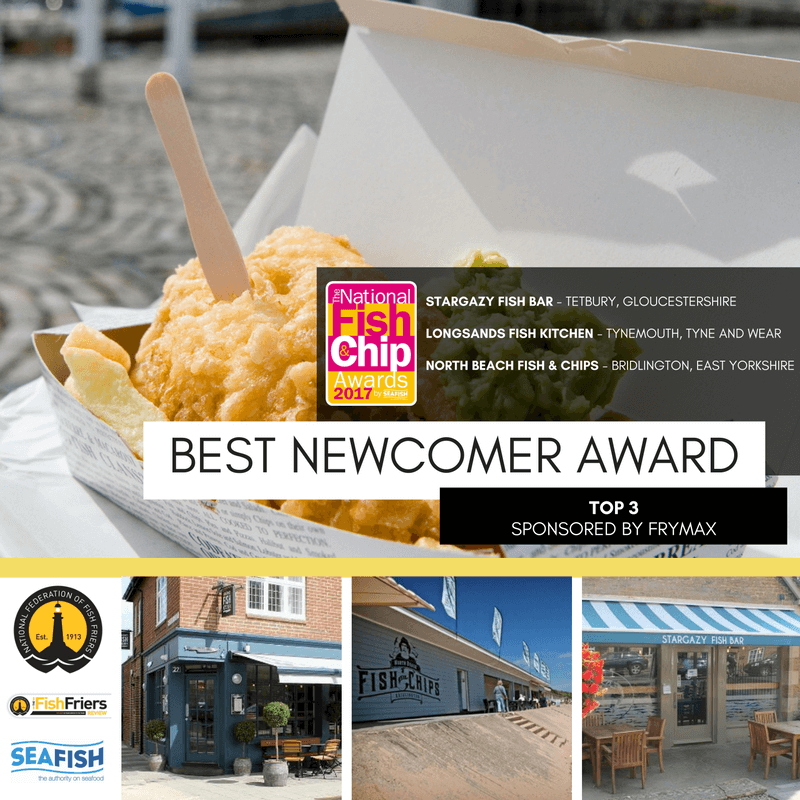 If you really need an excuse to head for Tynemouth, this restaurant is a good one

The Longsands Fish Kitchen, attached to a brilliant chippy, is proving a magnet for people who love very good grub

Heading for the seaside on a sunny Sunday afternoon always seems like a good idea until you remember that lots of other people will have thought likewise.

After negotiating the 30mph limit on the Coast Road and the bollard obstacle course that used to be the Billy Mill roundabout, you’re ready to relax over a nice plate of food in Tynemouth.

Only it’s heaving and you can’t park. My own fault. The Metro is a convenient alternative and at weekends you alight right in the middle of the market at Tynemouth Station.

I’ll do that next time. Although this really was an exceptionally balmy Sunday beside the coast with summer shorts and flip flops in abundance. Surely that’ll be it until next year?

Releasing the family, I went in search of a space for the old car and eventually found one that came with the added benefit of a good appetite-sharpening stride back to Front Street and our destination, Longsands Fish Kitchen. 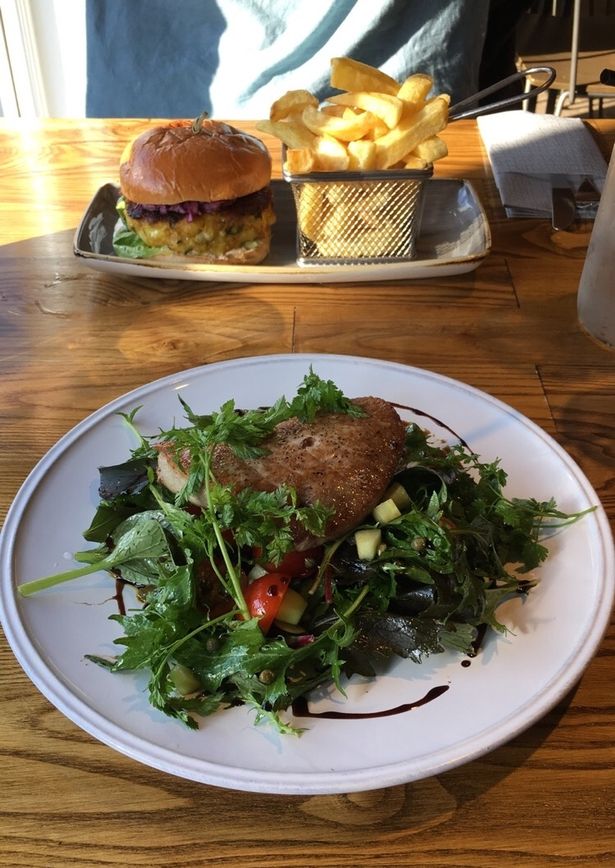 Blimey, we’ll never get in there! And we’d booked, too.

Seeing people crowding into a place you’re planning to eat in is both heartening and dispiriting.

But then my son came to rescue me. Like him, I’d blundered into the fish and chip shop on the corner of Front Street and Hotspur Street.

It both looked and smelled fantastic. But the sister restaurant was just behind, on Hotspur Street, and at 3pm it was evidently between the lunchtime and teatime influxes.

We had a table at the window and a view of the passing people and traffic – lots of eager dogs panting out of windows. The sun was beating against the glass and soon we had to pull the blind partially down.

Still, there’s an immediate sense that this place means business.

The cooking aromas are seductive, the specials board inviting and there’s a friendly briskness about the place which, though small, could comfortably pack in some 40 people.

The tomato ketchup bottles (glass, not common plastic) were a relaxing touch. You don’t want to worry about your Ps and Qs here, it trumpeted loud and clear.

Simple wooden tables, a floor reminiscent of a polished shingle beach and a bar fronted with the sort of blue and white distressed wood you see at any seaside resort.

Lots of nice little touches, like the shoals of kitchen knives on the food menus and of wine glasses on the equivalent for drinks.

There’s a ship’s porthole affair on one wall but nothing fussy. The food’s the thing. 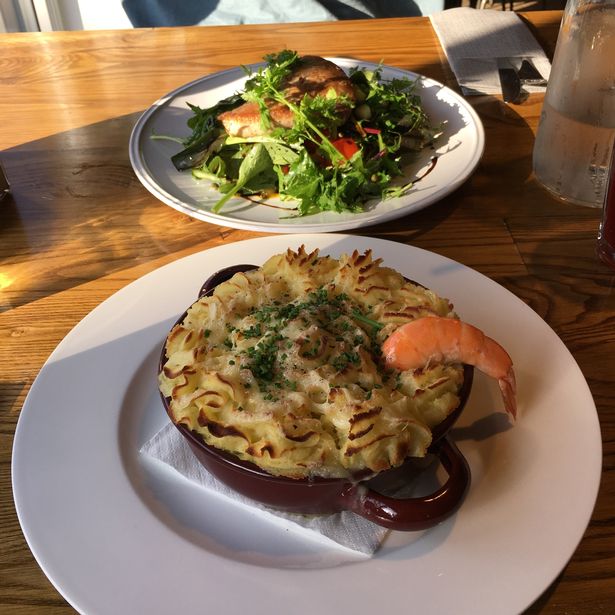 For a restaurant which could be described as ‘out the back of a chippy’, the offerings are quality.

Research told me this is the dream establishment of chef Simon Walsh who used to be at Close House where, I’d hazard a guess, you wouldn’t have found sauce bottles on the tables.

Anyway, reputations mean nothing. You take as you find.

What we found here was fabulous food, beautifully cooked and presented. To be honest, I could have stuck a pin in the menu because it all looked highly desirable.

In the end I went for classic comfort food, the Fish Kitchen Pie which proved to contain a bumper haul of salmon, smoked haddock, king prawn, scallop, cod and shrimp, and all beneath a potato and gruyere topping.

It was delicious and succulent and patently fresh. Who could ask for more?

My daughter, who’d had this place on her list, was the only one to hit the starters on behalf of us all.

She swallowed, after a little gigglesome mental preparation, a single Lindisfarne oyster, beautifully presented on a dish of something gravelly and with a little garnish of red wine vinegar and shallot.

We all tried the Chorizo and Cod Scotch Egg from the specials board – and it was special. The yolk was runny inside – a neat trick to pull off – and the crispy case a world away from the familiar supermarket scotch egg.

Other main courses that swam our way were Grilled Tuna (a relatively light bite on a beautifully seasoned salad), Spicy Shrimp Burger (with chips) and Indian Monkfish & Prawn Coconut Curry (definitely not a light bite but it looked beautiful with accompanying naan).

Thumbs up all round – and washed down with a glass of pink Prosecco and bottles of the Luscombe fizzy drinks from Devon.

I went for the hot ginger beer which was hot spicy rather than hot hot. Very nice.

And that should have been that. But the desserts beckoned and what better to follow fish pie than fruit crumble? And it was on the specials board.

Apple and blackberry, polenta and hazelnut crumble with a nub of icecream clearly modelled on a Close House golf ball rounded things off nicely – as did the sticky toffee pudding across the table. 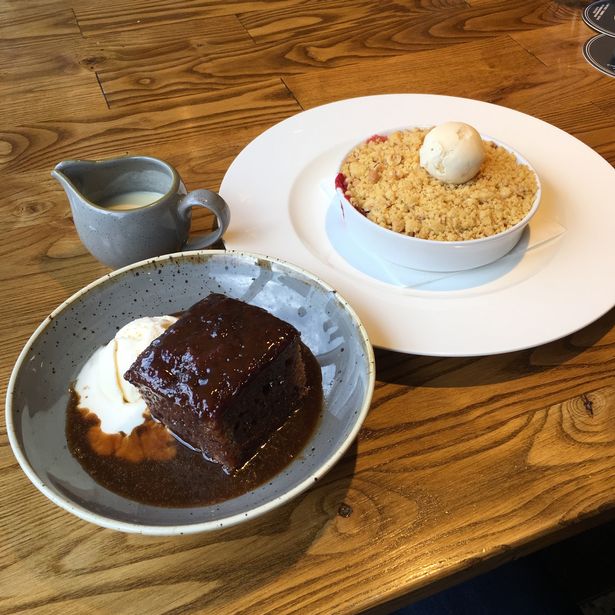 If it’s good, it’s worth it – and you could eat well here on various different budgets.

Bottled beers hover below the £4 mark and the bottles of Luscombe fizz are £2.50 each.

Our bill for four people came to about £80 – but we could have opted for traditional cod and chips for £8.25 per person or a couple of Longsands Banger & Chips portions for a tenner.

Are you being served?

The service was brisk and friendly with no sense of fluster when the place got busy.

The small staff seemed to enjoy their work. Well, it’s hard to imagine they get too many complaints.

Weekdays it opens at 11am; on Saturday and Sunday it’s 9am. Last sitting in the restaurant is 8pm.

Simon Walsh’s Longsands Fish Kitchen opened little over a year ago and is already making industry experts sit up and take notice.

Longsands Fish Kitchen in Tynemouth has been lauded as one of Britain’s top new fish and chip shops.

The restaurant and take-away on the corner of Tynemouth’s Front and Hotspur Streets has made it on to a list of the Top 10 fledgling fish and chip shops compiled by the organisers of the prestigious 2017 National Fish and Chip Awards.

Organised by Seafish, the group which supports the nation’s fishing industry, the awards are widely considered to be the ‘Oscars’ of the fish frying world.

Longsands, which is well-known chef Simon Walsh’s first stand-alone venture, is the only North East fish and chip shop to have made it on to the list.

Now Simon and his team will have to ‘fry’ for glory as they race to bag the overall Best Newcomer Award, set to be announced in London on January 26. 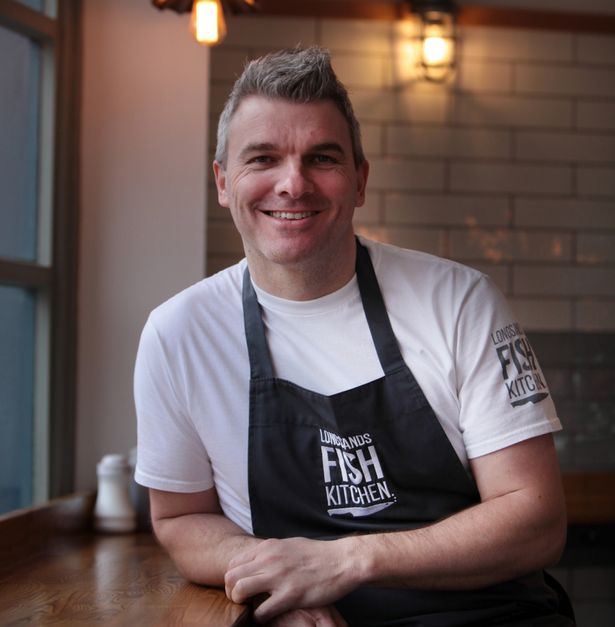 “After only trading for just over a year, to be nominated in such a prestigious competition as the National Fish and Chip Awards is a really proud moment and is one that is justly deserved by the whole team at Longsands Fish Kitchen,” he said.

“Win or lose, just to be recognised for the high quality and standard we are setting ourselves on a daily basis is fantastic.”

Longsands was appraised in key areas, including its innovative approach, promotional activity and responsible sourcing of seafood and other ingredients.

Over the coming weeks the shortlisted businesses will be subjected to mystery shopping assessments by industry experts.

The next stage of the competition will whittle down the top 10 to the three finalists that will go on to compete for the top accolade at the 2017 awards ceremony.

Marcus Coleman, chief executive of Seafish, says: “Being shortlisted in this award is a fantastic achievement for newly opened fish and chip businesses. It demonstrates their incredible talent, dedication and commitment to thrive.”

Sponsored by Frymax, the Best Newcomer Award was open to independent fish and chip businesses that had begun trading after October 1, 2014.

The National Fish and Chip Awards will be handed out in 13 different categories.

A popular fish and chip shop has been named one of the best fledgling establishments in the country.

Longsands Fish Kitchen, in Front Street, Tynemouth, has been named in the UK’s top ten shops as part of the 2017 National Fish & Chip Awards, organised by Seafish.

It will now go up against contenders from around the UK to bag the overall Best Newcomer Award.

To make the shortlist, businesses have been appraised across a variety of judging criteria including innovative approaches to running a new fish and chip shop, promotional activity undertaken and approaches to sustainable and responsible sourcing of fish and other ingredients.

Over the coming weeks, the shortlisted business will be subjected to mystery shopping assessments before three finalists will go on to compete for the top accolade.

Marcus Coleman, Chief Executive at Seafish, said: “Being shortlisted in this award is a fantastic achievement for newly opened fish and chip businesses.

“It demonstrates their incredible talent, dedication and commitment to thrive; traits that are to be applauded.

“I’d like to offer up my congratulations to the shortlisted shops and wish them the best as they prepare to continue their quest towards becoming one of our finalists. I also want to thank them for upholding our high industry standards and helping us to reinforce the UK’s reputation as the home of the world’s best fish and chips.”

Sponsored by Frymax, the Best Newcomer Award is open to independent fish and chip businesses that have been operating since no earlier than October 1, 2014.

We are delighted to share the news that we’ve been shortlisted for Best Newcomer at the 2017 National Fish and Chip Awards. We’d like to thank our amazing, dedicated and hard-working team, this is recognition of all their hard work since we opened.

To see the full article please visit this link:  http://www.newcastleeats.co.uk/longsands-fish-kitchen-tynemouth/